Welcome to our LGBT+ hub

This hub is for the benefit of LGBT+ staff, patients and carers in our county.

It includes information about local events, and also give contact details for those wishing for further advice.

Celebrating in Dorset 50 Years since Stonewall was born

In June 1969, in the violent wake of a police raid on a New York bar, Stonewall was born – a defining moment remembered by those who protested.

The Stonewall riots started in the early hours of 28 June 1969 during a police raid at the Stonewall Inn, Greenwich Village, a favourite haunt of gay and lesbian New Yorkers. As customers were hauled out in handcuffs, the crowd outside erupted into fury. That night’s rioting was followed by days of further violent demonstrations in the neighbourhood. It would change LGBT activism for ever.

The riots switched protest up a gear and pushed for an unapologetic, inclusive, enlightened culture in which gay pride would see off shame for good.

Fifty years later, Stonewall is one of the most significant global landmarks in the fight for gay rights (the gay rights campaign group in the UK is named after it). This month, June 2019, the movement’s 50th anniversary is celebrating in New York with a month of partying, lectures and readings and “the biggest Pride celebration in the world”.

It is hard to imagine what it must have been like in the 60s, when homosexuality was not only illegal but “still classified as a mental illness by the Diagnostic and Statistical Manual used by mental health professionals”. If you were gay, it was not safe to be yourself.

Here in Dorset we are celebrating with not one but two Gay Prides – in Bournemouth on July 13th and in Weymouth on July 26th and 27th. In particular the NHS Trusts across the County are uniting in their presence at Pride and in their determination to improve the care and consideration given to LGBT+ staff, carers and patients in Dorset.

Read an article about the 50th anniversary of Stonewall at The Guardian Online.

Taylor Dawson, a young transgender patient, gave Dorset HealthCare staff invaluable training into supporting LGBT+ people. The video above is his story and why he wanted to arrange training.

New research, published in The Lancet Child and Adolescent Health, has found that adolescents from sexual minorities (those attracted to same-sex or both sexes) in the UK are more likely to experience mental health problems, adverse social environments and negative health outcomes in contrast to their heterosexual counterparts.

The research aimed to rectify the lack of contemporary UK data in Generation Z (people born between 1995 and 2015) regarding the disparity in adverse outcomes faced by sexual minority young people who have grown up in this Century – a time of advances in rights for sexual minorities.

It is the International Trans Day of Remembrance on 20 November.

There were 331 reported murders of trans and gender-diverse people in the last year.

On the occasion of the International Trans Day of Remembrance (TDoR), the Transrespect versus Transphobia Worldwide (TvT) team is publishing the Trans Murder Monitoring (TMM) research project update to join the voices raising awareness of this day regarding hate crimes against trans and gender-diverse people, and to honour the lives of those who might otherwise be forgotten.

Violence against trans and gender-diverse people frequently overlaps with other axes of oppression prevalent in society, such as racism, sexism, xenophobia, and anti-sex worker sentiment and discrimination. TMM data shows that the victims whose occupations are known are mostly sex workers (61%). In the United States, the majority of the trans people reported murdered are trans women of colour and/or Native American trans women (85%), and in France, Italy, Portugal, and Spain, which are the countries to which most trans and gender-diverse people from Africa and Central and South America migrate, 65% of the reported murder victims were migrant trans women.20 November

• Read the conclusions and recommendations

LGBT people are being let down in health and social care, by structures and services that are not inclusive or designed with them in mind, and by a lack of leadership in Government, NHS and social services.

In a recently published report, the Women and Equalities Committee has found that too often LGBT people are expected to fit into systems that assume they are straight and cisgender. But the Committee has found that deep inequalities exist in health outcomes for these communities and that treating them “the same” as non-LGBT people will not address these poor outcomes.

All NHS providers must ask patients about their sexual orientation to improve the 'deep inequalities' in care for LGBT people, says an MPs' report.

Abortion has been decriminalised and same-sex marriage is to be legalised in Northern Ireland.

Bourne Free is looking for volunteers!

We are looking for NHS staff to help us celebrate as we parade through Bournemouth on Saturday 13th July 2019 to raise equality awareness to the community. Dorset NHS organisations will be joining forces hiring a bus and having an exhibition stand in the gardens.

We are currently looking for volunteers to get involved on the day.

Exhibition stand open from 10am - 5pm, Parade starts at 11am.

You will find us at Lower Gardens, Bournemouth.

Be a part of Dorset’s largest pride march 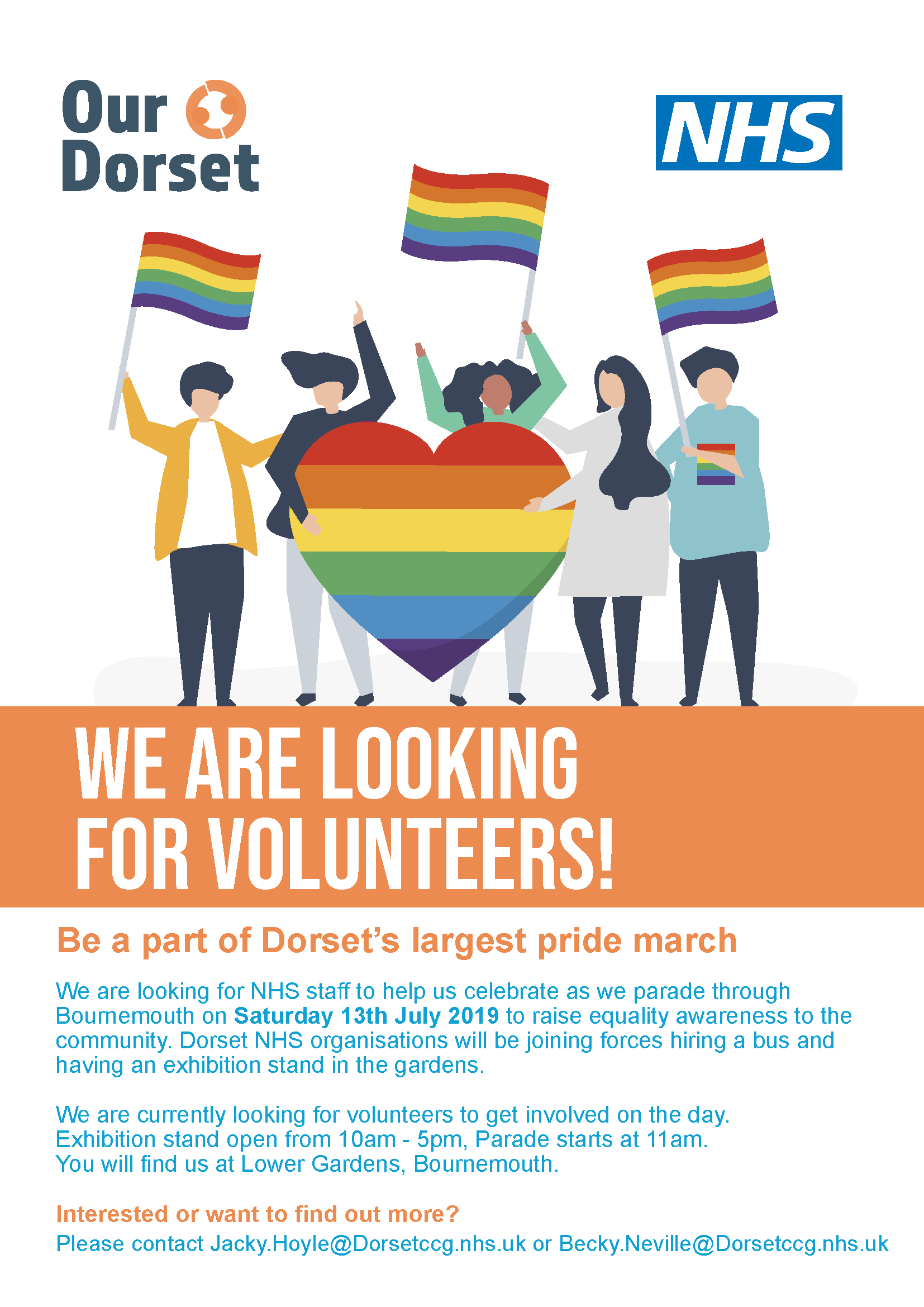 Our ambassador Jonai recently wrote this piece for the Weymouth Gay Group website to mark the International Day Against Homophobia, Transphobia & Biphobia.


We, Jonai and Brian, met in 1999 in Dorset, shortly after Jonai came to England as a mature student of English. We have been living happily together in Dorchester for 20 years. In the first five years Jonai steadily moved towards being able to apply for British Citizenship which was granted in April 2005. Later that year we were the first gay couple in Dorchester to have a Civil Partnership ceremony, and that certificate was ‘converted’ into a legal marriage in 2014, so we have not had to struggle, as some couples do, with immigration and nationality battles.

Happy though we are, our battles on behalf of others have intensified in the last few months, where a far-right, homophobic president has been elected in Brazil. Our gay friends there have told us that it is no longer safe for us to visit Brazil, as they are afraid to be open in the light of homophobic hate-crimes encouraged by the authorities.

The story of a Lesbian Brazilian Councillor, Marielle Franco, who was murdered last year, shows how very bad the situation in Brazil has become.

On May 17, 2019, our NHS Dorset HealthCare Trust commemorates the International Day Against Homophobia and Transphobia, or IDAHOT, through discussions and activities around the IDAHOT.

Lesbian, gay, bisexual, transgender, and intersex (LGBTI) people have made tremendous progress globally in claiming rights and inclusion, in recent years. However, LGBTI people in many countries continue to face widespread discrimination and violence, which leads to exclusion. This adversely affects both the lives of LGBTI people as well as the communities and economies in which they live.

June 8th OutDoor Lads (ODL) walk Going up Came Down
A beautiful circular walk from Dorchester, around the historic site of Maiden Castle and then going up Came Down! With panoramic views across Weymouth and Portland to the south and Dorchester and surrounding areas to the north. Walking along the chalk down then down through the valley back to Dorchester. Info www.outdoorlads.com/events/going-came-down-190608

June 8th - 9th GLUG - Gay & Lesbian Undewater Group
For divers who love wrecks, we are offering 2 days RIB diving out of Portland to the wrecks of Weymouth. We will be diving with Dive Beyond. The tides are perfect to reach those wrecks we often don't get to do. Provided the weather holds we can visit the M2, Aeolian Sky and Frogner this weekend. RIB diving is more flexible and means we can come back between dives. You will need be have Advanced Open Water certification or above and a minimum of 50 UK dives. All the deep dives are within the 30m range, but the bottom of some of the wrecks go deeper than this. Air or Nitrox are both available.
You must be a GLUG member to join this GLUG dive trip. More info - http://www.glug.co.uk/2019weymouthjune.html

June 10th OutDoor Lads. Sailing
Poole area. After a tremendous voyage last year, OutdoorLads is returning to the seas on board the Prolific in 2019! This is an incredible opportunity to become part of the crew on board the Prolific, an impressive sailing boat owned by the Ocean Youth Trust! It's due to their charitable status that we can bring this to you at such an incredible price - ordinarily, the trip would be at least twice the price! info - https://www.outdoorlads.com/events/voyage-board-pr... (Note - You will need to join ODL to take advantage of this event.)

June 22nd Chesil Rocks.
This popular annual local music festival is in aid of Samaritans of Dorset.
The London Gay Men's Chorus have performed here during the last few years, and are booked to return!
Info http://www.chesilrocks.com/

Advance notice of some events during 2019

July 3rd Ian McKellen
The Marlne Theatre Lyme Regis Ian McKellen is appearing in person, on stage at the Marine for a very special fundraiser. Limited tickets are also available for an intimate drinks reception with Sir Ian.
Info - http://www.marinetheatre.com/fundraiser-ian-mckell...

July 14th OutDoor Lads (ODL)
Studland & Harry's. A leisurely stroll from Knoll Beach to Harry's rocks, the walk will end at the Bankes Arms where you can enjoy a refreshment with your new friends before making your own way back to the start point at Knoll Beach. Make a weekend of it? There are two events this weekend, why not sign up for both! Info - https://www.outdoorlads.com/events/studland-harrys...

July 27th Weymouth & Portland's first Pride! 3 days of events.
Details here on The Weymouth & Portland Pride website -weymouth-pride.co.uk
Pride is not organised by Weymouth Gay Group, but we are very supportive and at it's birth! You can read about how the local Pride came about here - https://weymouthgaygroup.weebly.com/weymouth--port...

Aug 10 /11th GLUG Gay & Lesbian Underwater Group
For divers who love wrecks, we are offering 2 days RIB diving out of Portland to the wrecks of Weymouth. We will be diving with Dive Beyond. The tides are perfect to reach those wrecks we often don't get to do. Provided the weather holds we can visit the M2, Aeolian Sky and Frogner this weekend. RIB diving is more flexible and means we can come back between dives. You will need be have Advanced Open Water certification or above and a minimum of 50 UK dives. All the deep dives are within the 30m range, but the bottom of some of the wrecks go deeper than this. Air or Nitrox are both available. Note- you must be a GLUG member to join this GLUG dive trip. Info http://www.glug.co.uk/2019weymouthaug.html

Steps2Wellbeing offers a range of evidence-based therapy services in Dorset and Southampton for common mental health problems, helping you to feel better. Our service accepts self referrals from anyone over the age of 18 registered with a Dorset or Southampton City GP through our secure online form- enabling you to take control of your mental health.

At Steps2Wellbeing we strive to offer everyone help with their mental health in a supportive and compassionate way, including all LGBT+ community members whether they are 'Out' /self-identifying as LGBT+, or LGBTQ (LGBT 'Questioning'/exploring or on the journey to self-identifying as LGBT+.   We are proud to be working with the LGB&T Dorset Equality Network.

If you would like more information on our service or to self refer, please visit: https://www.steps2wellbeing.co.uk/how_are_you_feeling/about_you/lgbt/